This book is part of the CODESRIA Grant ‘Doctoral schools, Re-building scholarly infrastructures and academic communities in the Social sciences and humanities in African Universities’, 2017 with the Social Sciences and Humanities LAB – Catholic University of Angola.

“This is a major intellectual intervention since the neo-liberalisation of our universities which has had devastating effect on intellectual freedom, critical thought and creativity. It is my hope that the essays in this book will rekindle the debate on the University as a public space and reignite the struggle to reclaim education as the commons and not a commodity for sale.” Issa Shivji, Professor Emeritus, University of Dar es Salaam, Tanzania

“The essays composing this book are an excellent illustration of how, through an exercise of interdisciplinarity, it is possible to combine theory and practice in the analysis of the context of knowledge production on the continent, addressing themes that are fundamental to African academics. The questions raised become more important in the context of an uncertain future generated by the threats from COVID-19, which force us to rethink our institutions and their role, but also to permanently find alternatives to produce scientific knowledge from within.” Professor Teresa Cruz e Silva, Centro de Estudos Africanos, Universidade Eduardo Mondlane, Maputo, Mozambique

For those interested in the questioning of the humanities, this is a significant contribution for rethinking the university in the Global South and in the corporatized Western academy. It is a strong critique of neo-liberal policies and practices that, together with colonial legacies and authoritarian rule, plague African higher education. The other added value is the focus on so-called Lusophone Africa, one that is not easily found in English.

This collective work results from an exercise to re-enact freedom in the African University(-ies). It mobilizes the concept of Public Humanities in order to reflect upon the current emptying of emancipatory possibilities in African Higher Education that has been feeding itself from the prevalence of undemocratic rule in the shadow of neoliberal policies, transfiguring what liberation struggles set out to do into normative and disciplinary politics. But also decolonial and citizenship contemporary aspirations and the current and institutionalized attacks on critical thinking and pedagogy at the university as well as the need to qualify the relationship between the institutionalized site of the university and the production of emancipation and freedom. In the Public Humanities approach rehearsed here, humanity is not a soliloquy; it is a matter of ontological insurrections, solidarity and justice against zones of non-being. 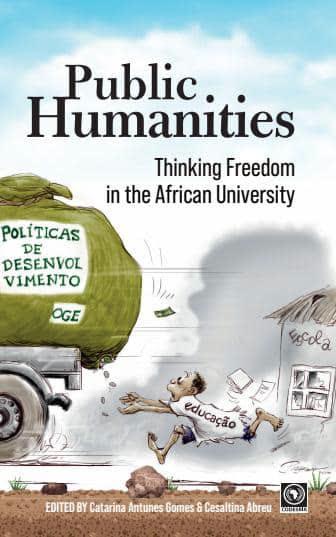